One of the nice feaures of this WordPress blog thingy is that it tells me the search terms you (hereafter known as ‘the readers’) are using to locate this blog. Obviously you, the readers, may not be looking specifically for this blog, but here you end up.

Now, I’m not sure if you lazy good-for-nothings can’t remember the web address of this blog, but you’re more or less there with the search term.

Can I suggest you add me to your Favorites/Bookmarks? Just to save your little fingers from all that typing. And stuff (and shit and things).

Test 1:
Does it connect to the internet? Yes.

Past test 3, I’m stuck as to what to suggest to my boss as to good things to check in IE7. Any help to the usual address (etc).

They say that when you resort to swearing, you’ve automatically lost the argument. But I suspect “they’d” say that if someone resorted to a gun, just before they were shot.

Anyhoo. Another cartoon, another fine demonstration of me not being able to do lettering – check out the two different styles on the “G”…

I accidently typed boredofjam into Google this evening.

Apart from feeling bad about using the World’s Most Evil Search Engine(tm) I discovered that this blog was a Featured blog. Woooo!

For the keyword Greeting. Er, woo!?

Following on from the hilarious cartoon based on Tony’s Wacky Races/Zany Tax Raising Dream (featuring Dick Dastardly and Muttley in The Mean Machine; The Slag Brothers in The Bouldermobile; The Gruesome Twosome in the Creepy Coupe; Professor Pat Pending in the Convert-a-Car; Red Max in the Crimson Haybailer; Penelope Pitstop in the Compact Pussycat; Sergeant Blast & Private Meekly in the Army Surplus Special (AKA The Surplus Six); The Ant Hill Mob in the Bulletproof Bomb (AKA the Roaring Plenty); Luke and Blubber Bear in the Arkansas Chuggabug; Peter Perfect in the Turbo Terrific (AKA The Varoom Roadster) and Rufus Ruffcut and Sawtooth in the Buzz Wagon), I was sent an email this morning.

From Tony Blair. He must have sent it to me personally, cos it arrived at my email address. I am honoured that he took the time. He must have been up late, too as it arrived overnight. Probably he typed it up after working out how many of the UK’s troops he can move around his Risk boardgame of Iraq without upsetting George Dubya.

Seems that 1.8 million people are wrong. And Tony (dear Tony) is right. Although to be honest, he could be in the clear. I don’t think that as a proportion of the UK population, 1.8 million is a statistically significant percentage.

Turns out that my “special code” for getting a picture to show on this lousy WordPress blog thing doesn’t work nicely under Internet Explorer.

So if you are using IE, I laugh in your pathetic face. Now fuck off, get a life and get a decent browser. Firefox is the answer.

Anyway, onto the pictures. The first is an “extree” Christmas card design I failed to put on the links below. It’s a very complex joke. Only those with a deep, deep knowledge of (1) Bugs Bunny cartoons and (2) the Alien films will appreciate it. So I’d like to welcome those people now.

Hello. Hello. Thank you both for popping in. 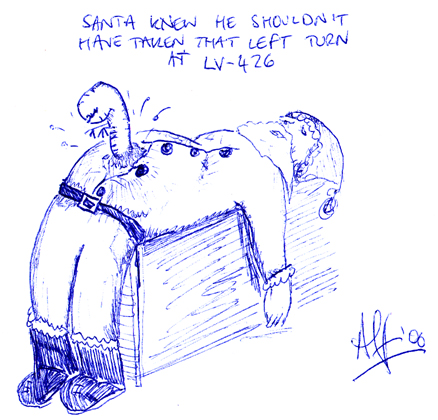 The next picture is designed to upset the mentalers out there. But then soon enough the Government will have locked them all back up again, so it dun’t matter. Coulda sworn that Care in the Community was all the rage before it all got a bit Police State round these parts… (a little bit of politics there, ladies and gentlemen).

Anyhoo, the pic is below. It’s funny. Honest. My carer says so. Now stop dribbling and let Nurse take your temperature.

I came out of the house this morning without applying any product to my hair.

I am sat at work without my usual air of panache.

I feel awkward, like the kid at school who always wore trousers with patches in the knees.

That comedy thing I mentioned that I drew (it’s viciously satirical as you will no doubt notice. I’m such a bitch):

The insert picture thing in WordPress is still shonky, so my solution (above) may be a bit dicey. Still, give it a go: Click for a larger version.

It’ll either show you the picture in it’s wonderful JPEGgy glory, or it’ll install a virus on your computer and format your hard-drive.

it has been suggested

You are aware that previous posts have featured some of the Tarantino script for the upcoming Hobbit movie?

I have had it pointed out that when released, it will be called Kill Bilbo.

I’ve just stopped having a bit of a tidy up.

The reason isn’t the usual excuse of “I’ve done two minutes, that’ll do”, but because I found a letter sent to me from a chap called Alistair Wisker.

At the time, Alistair was the Deputy Director of the Centre for Continuing Education at the UEA, and the letter was sent after I had completed a Diploma in Creative Writing overseen by the man himself.

Our tutor was the guy that wrote this and this (not sure about the lady-zombie on the cover though). He was ace, too.

The letter is full of praise. Indeed, a fair bit of it is insistent that I let him know how I got on with my writing.

My final mark was just 73%. Handwritten beneath the neatly word-processed letter is the following:

This was very much enjoyed by all who read it. In degree terms you have a first. Well done.

I think this is the first time I’ve actually read the letter.

I thought I’d do a web search on Alistair.

A great man, and suddenly very missed by boredofjam.

boredofjam*
Create a free website or blog at WordPress.com.