Yesterday was the first day in my rather tiresome existence that I noticed a change between looking at a computer screen with and without my glasses.

Yikes! Nurse! Pass the white stick and the Labrador!

Make sure it doesn’t have a Capital One credit card in it, and be prepared to wait for Tescos.

Having had to phone up to get my cards cancelled this weekend after an unfortunate incident whilst in Cologne, I can now reveal that the famous “No Hassle” pledge from Capital One is a load of old toot.

The chappy from Capital One in Nottingham appeared not to be able to find my details, and at first suggested that I might like to call back another day. I pointed out that I had just had my wallet taken and would like to cancel my cards before they were used. Monday morning wasn’t an option. So having given my postcode 4 times, my surname five times, my date of birth “just one more time” (I guess I was on the phone to Columbo), and being put on hold for minutes, we eventually got somewhere and supposedly the card has been cancelled. Unfortunately they moved the balance on to the new one…

Update: Barclays Internet Banking line, on hold for 25 minutes and they wouldn’t send me an “official” reminder of my membership number, I have had to write it down on a piece of paper.

Regular readers will (a) be thankful for a forgiving colon and (b) recall that I spent a week in Stockholm with some fine fellows from work.

I present the first picture of a set which I will turn to when I am old and grey and smile sweetly to myself with fond memories of all the loveliness this world contains. 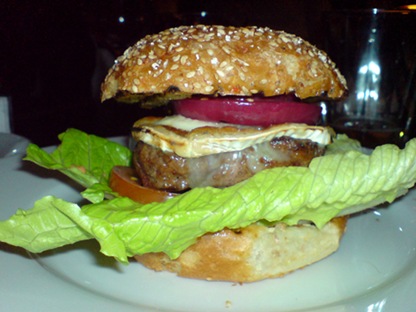 [Pic: The Best Burger I Have Ever Eaten]

For the less keen-eyed of you, this:

It is not a big cat, however, at 1:50am today, it filled my kitchen (mainly concentrating on the mat seen in the picture) entirely with shit.

Ever had to deal with cat shit at 2am? Big, stinky, get-up-20-minutes-later-to-spray-more-air-freshener quantities of cat shit? From a cat that doesn’t even belong to you?

I recommend it. Everyone should have the experience. My favourite bit was when I picked up a single sheet of kitchen roll with the intention of using it to clean up with, and then realising it would be a better bet to hire a mini-digger, or ditch the mat.

Mat donations can be made to the usual address.

“And the rain/It lashed down/And all the creatures/A’feared they would drown.”

Sparecat sorted himself out a nice new raincoat before venturing out into the darkness last night:

(For the logisticians among you, let’s examine that last caption, shall we? It should be understood as:

What a sad world it would be if the kiddies couldn’t play with some slavering German Shepherd/rottweiler eh?)

the other white meat

(Check me, I know how to be down wiv da kids)

Microsoft have kindly donated a few new tools as part of their on-going “Live” update to their traditional “offline” services. These include Live Messenger 8.5, Live Writer (what I am using now to post this, er, post), Live Photo Gallery, Live BSOD Reporter and Live Take Your OS And Stick It Up Your Arse. Although I may have made up two of these applications.

To be honest with you, the Writer app seems pretty bloody good and will mean I don’t have to keep sodding off to the internet every time I wish to do some writing.  Messenger is, meh, messenger (I’ll be needing to remove the annoying adverts from the bottom of the window though).

So, for once, a vaguely positive view on some MS freebies. If only everything from out of Redmond could be so spangly.

Dammit, someone has sent me a copy of the TV movie which kicks off the fourth-and-last series of Battlestar Galactica.

I’m just going to have to sit down and watch it, ain’t I?

I offer but two (2) trailers for your entertainment.

1. What Would Jesus Buy? A film by Morgan Spurlock, previously of Supersize Me .
2. Cassandra’ s Dream. Woody Allen’s next ‘un. And, er, by Christ it looks good. Even BigBlueSturge might like it, tho Buz won’t. “Woody Who?” He’ll say, and then talk about how funny Cheers was.